Josephine Alibrandi is in her final year at St Martha’s and she’s promised herself she’ll be a saint this year but everything is testing her: boys, family, the nuns, a father she’s never known, other girls at school and growing up a “wog” in Australia.

Looking for Alibrandi, the novel by Melina Marchetta, was first published in 1992 and turned into a film in 2000 starring Pia Miranda. On the thirtieth anniversary of the original release of the book, Malthouse theatre brings audiences a beautiful adaptation to the stage – written by Vidya Rajan and directed by Stephen Nicolazzo.

Josie resents having to follow old Italian traditions to keep her mum, Christina, and nonna, Katia, happy. The last year of high school is an intense time. She wants to be studying, not crushing tomatoes or helping her grandmother sort out old family photographs. She’s looking to the future and hates that her family is constantly looking back.

You see, if Josie wants to really be a saint, she has to overcome the curse on the Alibrandi family – something nonna loves to bring up every time something goes wrong or Josie acts like a teenager.

But when she tries to distance herself from family obligations by focusing on school, Josie is then distracted from study by John Barton – a rich kid whose family owns most of the North Shore – and Jacob Coote – the son of a mechanic who can talk a good game, but has no future aspirations yet.

On a stage covered in floral carpet - the kind only nonna would have (my own grandmother had similar), crates and crates and crates of tomatoes are waiting to be crushed and dispensed into jars to be used in cooking for the year ahead.

Against this striking backdrop plays out the coming-of-age story of Josie, but also of Christina and Katia, too. The Alibrandi we’re looking for isn’t just the kid who is trying to figure out what to do at uni, but all three generations of “cursed” Alibrandi women.

Focusing on all three women, Vidya Rajan’s text gives their stories weight and meaning – the play begins with Katia in a fog of reminiscence, explicating the curse upon the family. The film version, in comparison, is much for focused on Josie and how she follows the preceding generations. The stage version focuses a lot more on Katia, in particular, and Christina. 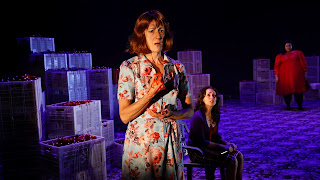 The cast is superb across the board. Jennifer Vuletic’s matriarch can command the stage with a shout, the drag of a secret cigarette or a silent moment when she remembers the man she truly loved.

Christina, who is both repelled and attracted to the returning Michael Andretti, is brought to life in a delicately judged performance by Lucia Mastrantone. Christina is rarely the centre of attention, in the way Josie and Katia make themselves, but we can see the world-weariness in the mother that works long days and finally finds an outlet for fun.

Vuletic and Mastrantone get to do double duty as a nun and Josie’s best friend, allowing them to lean into more light-hearted performances. Mastrantone’s school girl is the wild comic relief, whose character has a lovely arc of growth and surprising change.

Hannah Monson plays the role of Ivy, or Poison Ivy as she’s called by the other students, an entitled rich white girl whose showdown with Josie forms some of the drama late in the play. She might be the most thinly-drawn character on stage, but she is there to remind Josie where she sits in the pecking order of privilege – as a grand-daughter of immigrants, maybe she doesn’t belong at St Martha’s at all.

Monson also brings a warmth to the role of John Barton, Josie’s first crush and later friend, who is struggling with a suffocating father and a pile of expectations that should never be put on a teenager.

Jacob Coote is the wild boyfriend with the motorcycle and sexual experience, who wants he and Josie to have fun but knows when to back off. John Marc Desengano brings such exuberance to the role of Jacob – he’s charming and funny and allows us a hint at Jacob’s vulnerability at exactly the right moments.

The star of the show is absolutely, and rightly, Chanella Macri as Josie. She has such presence on stage and even though she towers over most of the rest of the cast, there are moments of heartbreak and hopelessness where she draws herself in and we can see Josie is still a teenage girl, torn between tradition and the future she’s making for herself.

Macri plays the joy and pain of adolescence so strikingly that she draws us through the ups and downs of the year-in-the-life narrative, where kids are pushed to plan the rest of their lives even when they don’t know what’s going on a day at a time. It’s a real tour-de-force.

Looking for Alibrandi remains an important book about the Southern European immigrant experience – a coming-of-age story for a teenage girl reckoning with the difficult history of her family – which is a long way from the Wogs Out of Work narrative (a highly successful play which toured for years) that dominated the 90s in Australia.

Putting this story on stage now allows us to examine how much has changed. The production enjoys playing with a nostalgia for the 90s – injecting some “Savage Garden” when the mood strikes – knowing that this was a period when Italian Australians could still be on the outer, even when us “skips” loved pizza and pasta.

After Stay Woke earlier in the year and K-Box coming up, Malthouse is putting the immigrant experience front and centre. Australia looks like this and I’m glad this company is putting these stories on stage to open our eyes to other lives.

Some of the dialogue in Looking for Alibrandi is Italian and the show is not subtitled. Everyone in the audience understood the emotions of what was going on, but there were plenty of Italians in the theatre the night I saw the show that understood everything – the language and the experiences – better than I ever could. Hearing that laughter of recognition was a real pleasure.

If this is a book you’ve read or studied, or a film you’ve loved because of Josie or Jacob Coote, or if you’re new to this story entirely, the Malthouse production of Looking for Alibrandi is full of the joy and heartbreak of life and I highly recommend it.

Looking for Alibrandi is playing at the Malthouse until July 31st. Then it arrives at Belvoir in Sydney in October. May it travel far and wide after that.