REVIEW: Brittany and the Mannequins by Callum Mackay 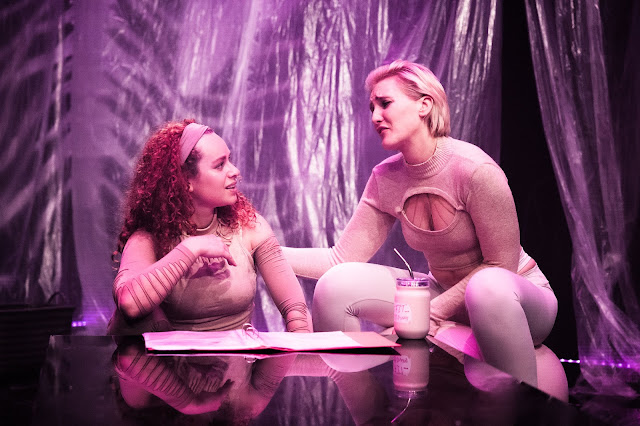 In 2011, Brittany Norwood murdered a co-worker at a Lululemon store in Bethesda, Maryland. Her victim had found a pair of yoga pants in Brittany’s backpack and called their manager to report it. Brittany murdered her and then concocted an elaborate ruse to cover up the crime. She used men’s shoes to track blood through the shop and tied herself up, waiting for the police to arrive ready to tell a story about men robbing the store, raping the women and killing one of them.

Local playwright Callum Mackay has used the details from this real-life crime, transferred its setting to the North Shore of Sydney and crafted a strange satire about wellness and influencers and the extremes women will go to gain and keep control over themselves and others.

The wellness industry to Q-anon pipeline is strong: marketing quick fixes to gain health and happiness can lead to a distrust in Western medicine, which can drive people to doubt vaccines, which points directly to governments using health measures to corral the populace, and then makes them docile for any number of nefarious schemes.

Mackay’s play doesn’t draw that line, though. The text is more interested in satirising all aspects of women who practice self-care and yoga. That, it seems, is the start of a slippery slope to the cult of exercise, athleisure wear and, finally, murder. He cherry picks details of the original crime to come up with a story whose most trenchant insight is that Capitalism is Bad.

Through nearly two hours, the cast talks at a rapid-fire pace, unleashing a torrent of cliches in an attempt to highlight the vapidness of these characters, who are cast as shallow, cruel and only out for themselves. But to what end? What is this play trying to say?

The scattergun approach to what the play wants to satirise threatens to bleed into making fun of everything: there are shocking moments of fatphobia and racism that feel inspired by the kind of material Absolutely Fabulous did thirty years ago. The women in the wellness industry are Cruel, so of course they hate everyone who is not like them. Jokes that punch down, even under the guise of black comedy, are still jokes that punch down.

The yoga pants that are the trigger for the murder recur throughout the play – an icon of the brand and a troubling symbol for Brittany herself. She has to learn how to fold them to put them on display. She cannot fit into them. They represent everything that is wrong with the place she works and what she feels is wrong with herself.

But when she says the leggings aren’t important until someone puts a label on them, the play elides any commentary on manufacturing and the supply chain. The life-cycle of this piece of clothing is troubled from the start, but that’s not part of the discussion here. Yoga pants will turn you murderous.

The pink LED lighting that surrounds the stage, accompanied by sheer plastic curtains and a set of human ribs hanging in the back of the stage does a good job of creating a setting, though. It’s a clothing store and a murder room. The occasional sweep of black-light exposes smears of blood. True blackouts and a thumping soundtrack create a truly upsetting murder tableau late in the play. Congratulations to the designers, Danni A Esposito, Savanna Wegman and Georgie Wolfe, whose combined talents created a memorable aural and visual moment.

But the thudding, discombobulating, droning soundtrack continues throughout the play. Perhaps designed to put the audience on edge, I found it distracting at many moments – unable to hear some of dialogue, which was already hampered by the choice to rush through and shout a lot of it.

Jacqueline Whiting’s Strawberry Blonde, charismatic store manager and cult leader, rises above the rest of the cast, giving some depth to a character who could have come across as one-dimensional. Whiting knows when to slow down and milk some of the more tension-filled moments, creating a memorable control-freak of a character.

Director Monique Marani has let the cast run wild and allowed the design elements to dictate the audience’s focus. It’s hard to see a shape here or a strong point-of-view. If the text itself is trying to incorporate too much, Marani hasn’t helped to find a clarity of expression in the production.

I understand why, upon hearing the true story, Callum Mackay thought it might make an interesting play. But Mackay hasn’t told the real story of Brittany Norwood, even though he’s used her real name and the details of her crime. The story of a black woman being driven to murder in Maryland doesn’t map neatly onto the North Shore of Sydney. And it feels like a poor basis for satire of the wellness and fitness industries.

Brittany and the Mannequins is a troubling mash-up of a real-life crime and unfocused satirical elements. There are a lot of interesting ideas floating around but very few of them come into focus or make any clear points about brand-names, fitness-cultists or murder.

Brittany and the Mannequins closes at the Northcote Town Hall tonight.