“In the old age, black was not counted fair,

Or, if it were, it bore not beauty’s name;

But not is black beauty’s successive heir,

And beauty slandered with a bastard shame.”

Shakespeare’s 127th Sonnet is the first of his Dark Lady sequence, poems inspired by a woman with black hair and dark skin. Who was this mysterious woman that Shakespeare used as his muse? One answer could be Emilia Bassano, the first woman in England to claim the title of professional poet.

Morgan Lloyd Malcolm’s play Emilia assumes this connection to be true in order to explore how history revered the man and hid the woman and how we are still dealing with the fallout of such treatment centuries later.

The play begins with an older Emilia reading the work of Dr Simon Forman, whose casebook details his interactions with Emilia. This text forms the basis of much of what is known of her life and her ambitions, but it is one man’s observations of a woman who came to him for astrological readings – which were a central part of medical practice at the time.

Malcolm’s play is structured around three periods of the central character’s life and three actors play Emilia throughout the show: Emilia 1 (Manali Datar) is the youngest version, full of passion and ambition and not ready to fall into line; Emilia 2 (Cessalee Stovall), who first appears after the loss of her second child and carries us through much of the second half of the play; and Emilia 3 (Lisa Maza), who acts as a kind of narrator throughout and embodies the steely, mature version of the poet.

Essential Theatre’s production of Emilia is filled with the kind of irreverence the company has brought to their takes on Shakespearean classics before – whether it be fully passionate productions of Twelfth Night or A Midsummer Night’s dream, a fully female-cast in Julius Caesar or Enter Ophelia, a deconstruction of Hamlet’s Ophelia that played a few years ago at La Mama.

It feels fitting that this female-led company would embrace this play, telling the story of a forgotten woman from history whose story is so often related to that of William Shakespeare. I fell into that trap myself, but quoting him at the top of my review.

Morgan’s play does not claim to be an accurate representation of history or a re-enactment of Emilia’s life. “It is a memory, a dream, a feeling of her” the playwright notes in the published text of the play.

The show follows Emilia through the typical tropes of the period: finding a man, keeping a man, and the story of a woman struggling to find and maintain her own identity, in a society that is not built for her. The fun and drama of the show comes in the deliberate anachronisms, central to the conceit that modern society was doomed by the deliberate obfuscation of women throughout history. 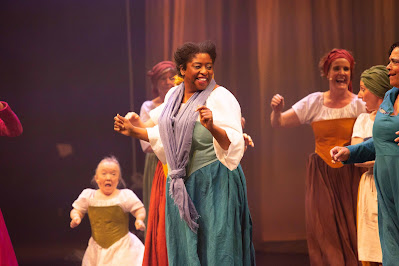 Casting three women as Emilia, amongst an ensemble of nine other actors playing dozens of roles, not only allows three actors to shine, it also brings further layers to the character. With the passing of the torch at the different stages of her life, the other Emilias ask if the third is ready, prepared to take centre stage. One of the central tenets of the play is how women support other women; the three Emilias support each other – the character coming to terms with how much she has changed over a life time.

We meet Emilia’s husband, Alphonso, who this play suggests is in a marriage of convenience with Emilia – she needs a spouse as a means to gain status and he needs a wife to protect his secret homosexuality.

We meet the women who Emilia later teaches to read and write; a colourful collection of women who work by the river and save Emilia from drowning.

We met a variety of men and women of upper-class society who are scandalised at her poetry.

And we meet William Shakespeare, who is beguiled by this “dark lady” and beyond using her as inspiration for sonnets, probably used her name when penning Othello. Will shakes-splains writing and poetry to Emilia and why she shouldn’t write or perhaps cannot be a writer in the same way a man can. It all comes down to him being allowed to live a life that Emilia cannot, but not for want of her trying.

With a cast of thirteen, Emilia is a true ensemble of women, supported by female and non-binary production and creative teams. Director Petra Kalive keeps the production moving along, the fast-paced dialogue and the joyous performances keeping much of the show light and comedic. Which means when the dramatic moments hit, they pack a real punch.

The entire ensemble sings as the play runs through the highs and lows of Emilia’s life. And the three women at the centre are allowed to truly shine. Manali Datar’s young Emilia is full of joy, with a cutting wit that allows her to deal with a parade of awful men, trying to find women for wives or pleasure. Cessalee Stovall’s older Emilia is bold, a stronger woman bearing the scars of life but not yet ready to fall into the box that society has designed to keep her in.

Lisa Maza is the oldest version of Emilia, on stage for most of the show and guiding us throughout, brings a full-force fiery performance to her section of Emilia’s life – bringing the show to a powerful close and the opening night audience quickly to their feet. The closing monologue is such a strong piece of writing and rhetoric, designed to capture women’s anger and expose it to the audience. A standing ovation is almost required, but here it was so very well earned.

One note on the opening night: there was unfortunately a full show stop about half-way through act one when one of the actors had to leave the show in pain. After the show recommenced, standby Izabella Yena stepped on stage to play William Shakespeare without much preparation. In a show that embraces the theatrical at every turn, having a Shakespeare that needed to consult the script in his hand felt like a perfect piece of happenstance in trying circumstances. And Yena did an incredible job.

Essential Theatre’s production is fun and playful and a truly searing look at women’s pain and the anger they have inside. I first saw this show on the West End in a two-show day when I first saw the musical Six and they were the perfect complement to each other – centring women in history that have so long only been remembered in relation to the men in their lives. Melbourne is so lucky to have seen Six earlier this year and to have Emilia on stage at the Arts Centre now.

This is an incredible play in a stellar production with an incomparable ensemble cast. A blistering feminist attack on the history we’ve been told, opening up a new way to look at those women who have been overlooked for so long. Don’t miss it.

Emilia tells her story at the Arts Centre Melbourne until November 27th and then plays the Canberra Theatre Centre from Dec 1st to 3rd. Further cities and dates are assured. 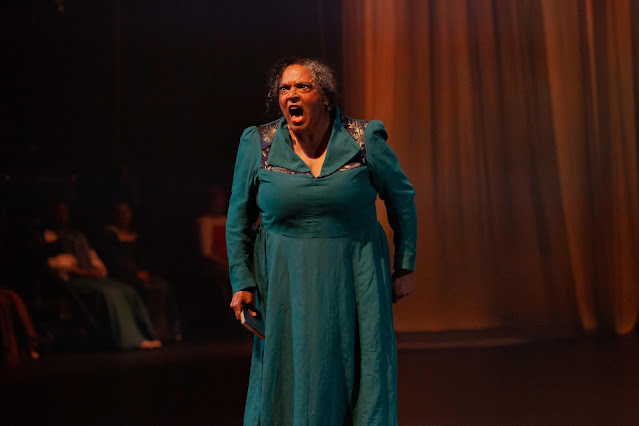