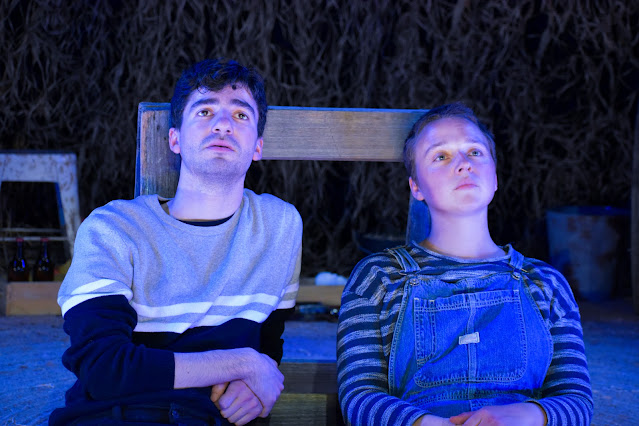 A wheel of dried grass.

A flock of sheep.

And two sisters holding a man at gunpoint, demanding to know what he’s doing in their field in the middle of the night.

Becky, the younger sister, who isn’t holding the gun, is having a laugh at the whole situation. Is this stranger out there fondling the sheep? Is he doing it in the middle of the night so he won’t get caught? She lets him know he’d probably get away with it during the day, because there’s no one around for miles.

Anna, the older sister, has the weight of the family farm on her shoulders and this young man at the end of the gun can’t know if she’ll shoot or not. He’s terrified.

The opening scene of Gundog is full of tension punctuated by Becky’s weird and wild observations of the world and the situation the three of them find themselves in. It’s hard to know why she feels so carefree about joking while this poor Guy (he tells them that’s his name) cowers, begging for his life. It’s funny, but the kind of funny that audiences tread carefully around. Some of us were chuckling and the rest of the crowd was deathly silent.

Becky and Anna’s parents are dead. Their brother is estranged. And the sheep they are tending, they admit, are not theirs. Desperate times call for desperate measures.

Or, perhaps, these are the last three people in the whole world. Who’s to say in the middle of the night in the darkness of the countryside?

Simon Longman’s play – first staged at London’s Royal Court theatre in 2018 – is a story about trauma and being unable to escape the cycle of family grief. The show turns backwards and forwards in time, the large circle of dried grass in the centre of this stage is an unmoving turntable, around which the characters run forward and fall backward.

We meet their brother and uncle in earlier times, even before they have lost their dad – though he haunts their lives and the family farm years before he’s actually gone. Clearly, the family is trapped here, on a patch of dirt they have live on for years or decades – unable to escape.

Though the play was written by a British playwright, the text doesn’t specify a time or a place that it’s set. This production has chosen to set it in England, the cast employing accents from all over the UK for some reason. The inconsistency here made me wish they had chosen to set it in Australia, given its rural location and brother Ben’s suspicion of foreign worker, Guy. The dry patch of grass evoked outback Australia to me, though I guess climate change is slowly drying out the United Kingdom as well.

Thalia Dudek as Becky is the stand-out on stage, creating a complicated figure, whose jokes are for sure a coping mechanism but also an insight into the character’s optimistic outlook amongst her bruised and broken family members. Dudek is a real delight to watch.

Dion Mills’ Mick brings the family comedy/tragedy centre stage when we travel back in time to deal with the children’s uncle losing his marbles. His rambling story was funny once, but as he told and retold it, we could see the true pain the character was in. It’s a wonderful performance.

Unfortunately, though the rest of the ensemble has their moments to shine, they often feel like they were working at cross-purposes rather than bouncing off each other. Alonso Pineda’s direction is not clear enough to bring out the depths in the text or make the ensemble feel cohesive.

There are beautiful moments in the show, though. Harrie Hogan’s Lighting and Sam Porter’s Sound Design create an odd other-worldly quality as the play bounces backward and forward, the characters unstuck in time, unable to outrun or outgrow their trauma. The final scene, as the three children grapple with their place in an uncaring universe, is very moving. Unfortunately, most of the production doesn’t contain that level of clarity or insight.

Gundog reaches deep into the heart of rural communities left to rot but this production trades too much on the grief and trauma and doesn’t let the comedy and the true absurdity of the play sing.

Gundog is on at Chapel Off Chapel until November 13th