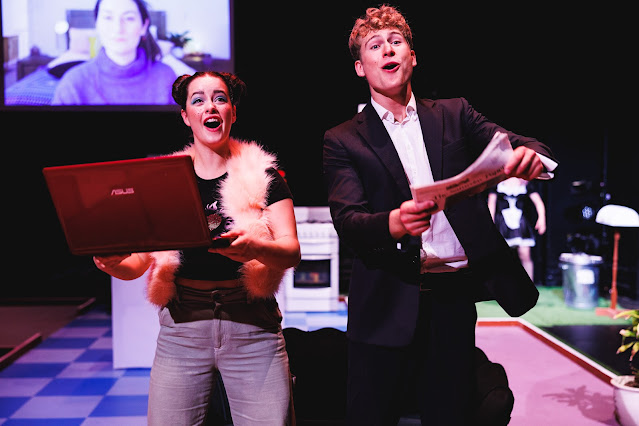 Why do people play computer games? To fulfil fantasies. To escape reality. To be the action hero they can never be or solve puzzles and gain prizes and visit far off lands or other worlds.

The Sims is a series of sandbox games, where players create virtual people, place them in houses they create and give them skills, desires and fears to see what happens. The first iteration of The Sims was released in 2000, though it was preceded by SimCity, which first debuted in 1989.

There is no plot to The Sims and no particular goals, though the fans in the community define challenges to make game play more interesting, like the Dumpster Challenge or the 100 Baby Challenge.

Frenzy Theatre’s MOTHERLOD_^E, named after a cheat in the game that gives you extra money, recreates the game live on stage with a video feed of the player, Sarah, projected onto the back wall. She is living in her childhood bedroom – both as a teenager, and later, after they have to return to living at home as an adult.

If only life was as easy to navigate as this simulated world and there were cheat codes so you didn’t have to go home to your parents. 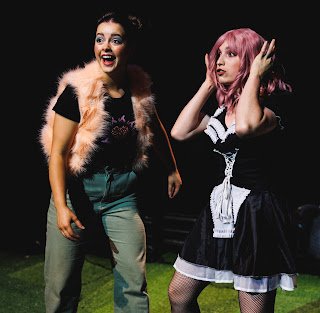 The theatre-makers have gone to a lot of effort to create a basic house from the game, the set laid out like a full floor plan, so we can see the living room, the kitchen, the bathroom, the bedroom and a room that contains just an easel so the characters can up their artistic skill.

The set is impressive but not nearly as wonderful as the performances by the ensemble playing the in-game characters. They move in a bouncy walk and turn at 90-degree angles. They never stand quite still, but hang, waiting for their next command or interaction. They speak in one-liners that feel oh-so-very written, because every move is determined by a Player and an algorithm.

The cast is impressive because every move and pause and replayed-gesture feels right. I don’t think you even need to have played The Sims to understand the limitations of human figures in a video game. It’s uncanny and even uncomfortable, but this production knows the details and confines of the game and uses it to their theatrical advantage.

Take, for example, the moment the character of the Grim Reaper appears, floating along, her cloak billowing-out around her. Or when the Player leaves the game on pause and one of the actors has to stand still in a goofy, grinning pose for minutes at a time. We are fully immersed in the game-inside-the-show.

Outside the game, though, is the thinly-sketched player named Sarah, who first played The Sims while she was in high school and boots up her old computer to dip her toe back in when she returns home, unemployed. Like the characters in her game, Sarah is looking for work and having relationship dramas and nothing really fits together.

One of the major problems with the production is that Sarah, ironically, is on screen and the audience doesn’t really get to know her. Her DMs occasionally appear on two screens that sit to the extreme sides of the stage, meaning the audience has to keep turning to read them to understand what’s happening in the “real world”. I found this particularly difficult in the front row.

The real-world queer community, in our reality, has embraced The Sims because it’s a way to be out before coming out. The game itself is progressive with its use of pronouns and allowing characters to be gay, lesbian or bisexual. Sarah is queer and she’s having problems with Juls, one of her friends from high school, who she might also be in love with? It wasn’t clear to me. Their other friend Becs is trying to bring them back together, but most of it is left oblique.

What becomes clear over the course of the show is that Sarah is frustrated with the game. Perhaps it doesn’t scratch the same itch as it did when she was in high school. Perhaps, now that she’s out of the closet, The Sims doesn’t need to act as a place where she can be herself.

More likely, in a real-world where Millennials can’t hope to own properties and often have to have side-hustles to make ends meet, maybe Sarah can’t enjoy a fictional utopia where you can gain skills quickly, get pregnant and afford a home.

Motherlode’s highlight is its recreation of a world, playing to an audience that understands Simlish (the in-game language) and semoleons (the in-game currency) and a wealth of other in-jokes that non-players like me didn’t get. But it relies too heavily on these recreations to carry the show. What are we to take away from the play, if we don’t have insight into Sarah and why she has become so disaffected with life and The Sims?

In the end, I know there is an audience for this show that will laugh all the way through, at the delightful jokes about the game that makes fun of their obsession. I just wish the theatre-makers could look outside the live-action simulation of simulations and dig a bit deeper into why people are drawn to this world and what might push them away.

Motherlode is hilarious and the ensemble is outstanding but it needs to find focus and define the character of Sarah much better.

See this simulation of The Sims at Theatre Works until January 14. 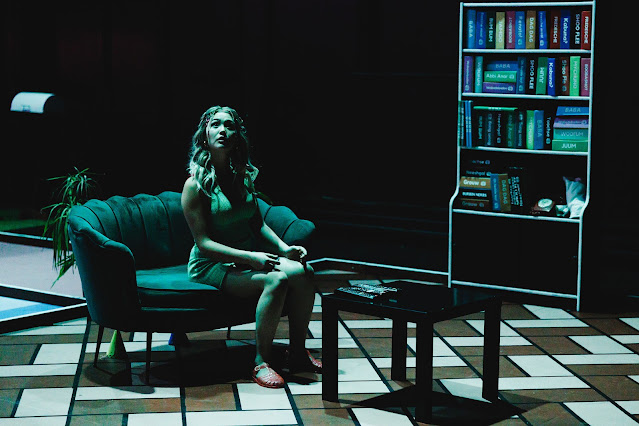