My Favourite Theatre of 2015

on December 23, 2015
I’m scared I’m going to forget something. I saw so much great work this year, I’m worried that I’ve missed something from my list. Or it wasn’t recorded properly in my Calendar. I reserve the right to add to this later, if I wake up in the night, remembering something I forgot to mention. Or a rave I forgot to make.

I saw shows in Melbourne, Adelaide and Sydney this year – and amazing work in all those places.

Here we go... in alphabetical order...

ANTIGONE - Malthouse
It divided the critics (along gender lines) but I thought Jane Montgomery Griffith’s translation/update of Antigone was superb. One of a number of shows that left me utterly speechless this year. I eventually found words.

FAKE IT TIL YOU MAKE IT - Theatre Works
I’d heard a lot about Bryony Kimmings and then I saw two of her shows within a few weeks of each other and she has become one of my favourite theatremakers and performance artist. This show about men and depression is so funny and heartbreaking, almost at once.

I AM A MIRACLE - Malthouse
Another stunning achievement from Declan Greene and Matt Lutton. Again, I didn’t know what to say after. But couldn’t stop talking about it once I found the words. 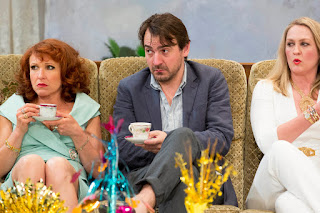 IVANOV - Belvoir
I’m not a big fan of Chekov’s work, but I’ve grown more fond of it since Simon Stone’s The Cherry Orchard and now Eamon Flack’s translation of Ivanov – into the present and the Australian vernacular (though still ostensibly set in Russia). Made me go back and read the Chekov play and sit in awe of what an incredible achievement this production at Belvoir was.

LOVE & INFORMATION - Malthouse
Caryl Churchill is one of my favourite playwrights because she always challenges form. Love & Information goes so far as to make a play that could be staged in billions of ways (no exaggeration) and still feel heartfelt and insightful. Kip William’s direction is so thrilling, keeping the actors and the set moving, but creating moments of stillness that are unforgettable.

SEX IDIOT - Adelaide Fringe
The first Bryony Kimmings show I saw this year and I love how honest she is about her sex life and how uncomfortable she made her audience – and how forthright she was with dumb male hecklers in the audience. With possibly the most unique audience participation I’ve ever seen.

SHIT - Neon/Melbourne Theatre Company
Patricia Cornelius is one of Australia’s greatest living playwrights. Her career spans three decades and her work is always engaging and confronting – particularly when collaborating with director Susie Dee. So excited this is getting a return season at Fortyfive Downstairs next year.

YOUARENOWHERE - PS122/Melbourne Festival
The show I want to tell you all about, but never give away its secrets. It blew my mind and had me in tears, not because it was sad but because it was so smart. So very smart. And filled with the unexpected.

WIZARD OF OZ - Belvoir
Sydney didn’t know what to make of Adena Jacob’s bold feminist take on the Wizard of Oz, which is about childhood and girls becoming women and what society does to them. I had some idea, having already loved her work in Melbourne. Yes, two Adena-directed works in my Top Ten. And another further down the list.

BRONX GOTHIC - PS122/Melbourne Festival
A visceral experience, this show opened with a dance piece that was so captivating that I was shaken when it ended and the actress began speaking to us, reading letters from teenage girls to each other. It is shows like this that open up new worlds to me, even when they feel familiar – everyone experiences life so differently.

DEAD CENTRE/SEA WALL - Red Stitch
A one-two punch from Tom Holloway and Simon Stephens at Red Stitch. Two beautifully crafted short plays that enrich each other – with a pair of beautiful performances to bring them to life.

FAG/STAG - The Last Great Hunt/Melbourne Fringe
I saw this twice because it was so deceptively simple: two best friends, a gay guy and a straight guy, talk about the days leading up with their best friend’s wedding. The discussions are so real and so poignant, I needed to see it again to figure out how they did it. But it was just amazing writing and superb acting and something that felt so real.

GROUNDED - Red Stitch
Red Stitch is always amazing but I don’t get to see everything there, so I was glad I caught up with this show in Sydney. A tight and taught script, performed with hair-raising brilliance. Probably the best single performance I saw all year. 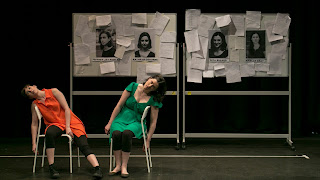 MINNIE & MONA PLAY DEAD - The Last Great Hunt/Melbourne Fringe
The Last Great Hunt’s second of their great one-two punch (after Fag/Stag) wasn’t anything like I expected, which was a very good thing – because I’m not sure I would have gone if I knew what I was getting. With a subject as confronting as suicide, I was glad this show looked after their audience every step of the way.

STRONG FEMALE CHARACTER - Melbourne Fringe
This show was guaranteed to make me laugh: tearing down untouchable male characters from signature 80s action/adventure films. Rowena Hutson lulls the audience into a false sense of security with her bald cap and five Die Hards in five minutes – and then tells us how hard it is to grow up wanting to be Han Solo and then discovering she wants to have sex with him, too. Genuinely smart comedy.

SWEENEY TODD: THE DEMON BARBER OF FLEET STREET - Victorian Opera
Putting aside the wooden performance in the lead role, Victorian Opera’s production of Sondheim’s masterpiece was superb on every other level.

THEY SAW A THYLACINE - Malthouse
I’ve been following the work of Human/Animal Exchange for several years now and I was thrilled their highly regarded Fringe show from a few years back was making a leap to the mainstage this year – and will tour the country in 2016. There is such beautiful work in this show.

WE GET IT - Neon/Melbourne Theatre Company
Boy was it uncomfortable being a man in this audience, which – you know – good. Basically it’s a reality show about female actors pitting their talents against each other – to prove themselves the better actress and the better woman. Emily Tomlin’s performance was shattering. And those tweets on the screen behind her, I felt like throwing up.

YOURS THE FACE - Theatre Works
Fleur Kilpatrick’s show about a model and a photographer was memorable for her writing, and unforgettable because of Roderick Cairn’s performance as both model and photographer. Holy shit.

BECKETT TRIPTYCH – forget your Endgames, the best Beckett I saw this year was Eh Joe, Footfalls and Krapp’s Last Tape at the Adelaide Festival

GENDER SPANNER – there were a lot of shows at Melbourne Fringe that explored gender; this was one of the most compelling.

JUMPERS FOR GOALPOSTS – another awesome show from Red Stitch, which I caught at Midsumma 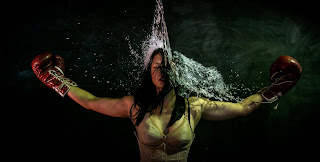 NO PUNCHLINE – I don’t know circus, but I know what I like. I loved this. Melbourne Fringe

PROJECT HYSTERIA – two Tennessee Williams’ short plays, prototypes for The Glass Menagerie and A Streetcar Named Desire, created a tension between what we expect of those characters and what happened in these shows. Poppy Seed Festival.

THE BACCHAE – The third Adena show on my list for the year and another unforgettable night at the theatre. Theatre Works.

THE YELLOW WAVE – Beng Oh and Jane Miller’s satiric adaptation of an earnest 19th century novel, warning of the dangers of those who come across the sea... A laugh a second. Poppy Seed Festival.