Melbourne Fringe: Invasion of the Bodysnatchers 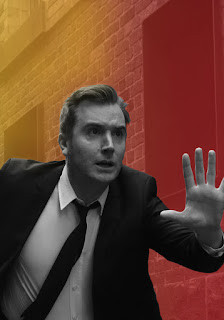 Rob Lloyd is a geek, a nerd and a lover of pop culture. At Melbourne Fringe alone over the years, he’s celebrated his love of Doctor Who, Star Wars and Sherlock Holmes. Earlier this year, he and his “Innes Lloyd” partner David Innes, wrote a show dedicated to Journey to the Centre of the Earth. His love of classic genre fiction shines through.

Writer and director Peter Cox clearly has a passion for The Body Snatchers, the 1955 novel by Jack Finney, which was the basis for the famous 1956 film, Invasion of the Body Snatchers. This one-man play, a recreation of the story by Lloyd, is a homage and a pastiche.

Lloyd is painted in heavy theatrical make-up and the audience is treated to something resembling a black and white film on stage in front of us. There are music cues from other black and white films from the era, but it’s not quite like the celebrations Rob has done previously. If you didn’t know the Body Snatcher story before, this show re-tells it really well.

There’s theatrical trickery, lighting and some moody black and white photography to flesh out the world, but this show rests on Rob’s talents. And what a talent he is. Occasionally I saw the cheeky grin and wink of Lloyd the improviser, but mostly we get an energetic and frenetic straight re-telling of Finney’s story.

There are genuinely dramatic moments in the show, even as the tone swerves from embracing the cheesy aspects of the film to the creepiness at the centre of this alien invasion story.

Rob’s shows are often comedy supported by his charm. Invasion of the Body Snatchers is a solid piece of acting from Lloyd, playing every character in this new iteration of a classic.

Invasion of the Bodysnatchers is inhabiting Studio 2 at the Arts House until Sept 30th.